Key Largo to Homestead to Miami

The ride to Miami will take us through Homestead, Florida. All we know about Homestead is that it was hit in 1992 by Hurricane Andrew. The media was full of footage of devastated neighborhoods, especially trailer parks and other less protected homes. And so, to some extent, because that storm received so much coverage, we haven’t expected much from Homestead. It strikes us as a place with a difficult history; that’s about it.

Well, we’re wrong. Or, rather, we’re right – it’s a place with a difficult history – but it’s doing better now. Homestead is lovely, or at least the part we have the pleasure of riding through. Miles and miles of quiet roads and nurseries: rows of palm trees interspersed by rows of flowering trees and fruiting trees – all done so beautifully, we stop on a regular basis to take photos. 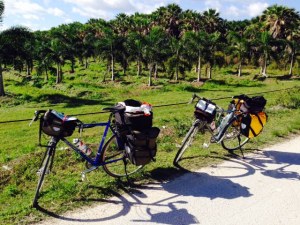 In Homestead, bikers pass us by. They are serious. They travel in groups, dress in the best and brightest spandex, and sound a lot like swarms of enormous killer bees, coming at us from behind. (A number of days later, in another Florida town, we’ll get to chatting with a woman whose boyfriend is at that moment in Homestead, attending a cycling camp for professional and other serious bikers, and it will all become clear. “Oh!” we’ll say in unison.)

Before arriving in Miami, we stop for lunch at a pizza place. We order pizza – not a small pizza – and we eat it as if we’re in a pie eating contest. This is part of what’s becoming the new normal: we are very very hungry. The word Hoover has emerged as a favorite in our new vocabulary.

After lunch, we stop at a botanical garden that’s playing host to a farmer’s market. We walk around, order a mango strawberry smoothie, look at the booths, look at the plants. One is called a “sausage tree.” We have our picture taken underneath. 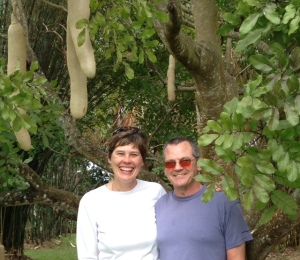 The sausages are very odd and more than phallic. We giggle. It’s a very pleasant day.

That night, we stay in Coconut Grove, at a cottage that I’ll love and Jerry, not so much. (There’s no soap – he likes for there to be soap. We have our own, I remind him. He’s still not thrilled. Also, the guy from whom we rent the place stops by to let us in and give us the key; he has a cold. I don’t even think about it, but Jerry grows concerned. He envisions us being sick on the ride. It’s not an unrealistic worry. Luckily, none of his worst fears are realized.)

For dinner that night, we go out for Cuban food, then walk around and soak in the overall vibe; it’s a lot of fun. We go to bed that night feeling like we’ve accomplished something. Unfortunately, we have some concerns about our ride to West Palm Beach. But those are concerns for another day…

This entry was posted in Uncategorized. Bookmark the permalink.

1 Response to Key Largo to Homestead to Miami