I already said in my Poughkeepsie post — in which I didn’t give Poughkeepsie anywhere near the recognition it deserves and would have gotten if it had fallen toward the beginning of the trip, rather than the end — that the miles have taken a toll on my memory. Jerry is really good at recalling details of the places we have been. He’ll say, “Remember the beautiful bar in the restaurant that was below our hotel in Port Jervis? You had a burger and I had pasta, and we both tried that Founder’s draft. They were sorry they couldn’t sell us the Creme Brulee draft, but they were out of it, which was good, since we’d already tried it in Columbia, PA, and didn’t like it. Remember?” And I’ll say, “Port Jervis?” For me, the stops that are most memorable are the stops where we see friends. Like when we saw my friend Hope for dinner  Stockton, because she was kind enough to drive there and meet us:

As we travel north, and the towns blend together in my bike-addled brain, I do recognize that the areas through which we are biking have begun to look more and more like home. There are hills, for one thing. And there are white pines and cedars and other types of conifers, types which we didn’t see for so long. The air smells like northern air. This sounds silly, I know, but it’s true. We’re approaching home. We move through Pennsylvania, New Jersey, New York, Connecticut. We’re only in Connecticut for about a minute. It’s a nice minute, though, with stays at a nice, renovated motel, and a pretty inn in the home of a couple around our ages, which is to say 50-60ish. (They are very nice, except that they argue while making our breakfast, he saying she’s mistiming the toast for his scrambled eggs, she closing the kitchen door and muttering loudly to him while we sit, awkward, five feet away.) We move north, into Massachusetts. We’re headed for Northampton, where we have a number of friends whom Jerry has known for years – from different stages in his life – and these friends are friends with each other. His medical school roommate, Gary, lives in Northampton with his wife, Cindy. Gary is a psychiatrist. In his spare times, he paints. Here’s one he did of himself and Cindy:

Jerry has known Gary the longest of the group, and we often stay with Gary and Cindy when we’re passing through, but they live at the top of a couple of very big hills. Knowing this, our friends Bob and Nancy have offered us a guest room in their house, pointing out that it has the benefit of being in low country. Bob did his anesthesia residency in Burlington many moons ago, when Jerry was a very young attending. They became good friends. When Bob moved to Northampton to start his own career, Jerry introduced him to Gary. On the way into town, we hit a snag where an important road and bridge are flooded. There’s so much construction going on in town that a workaround is not necessarily obvious. We no longer trust Google maps for the area. I call Bob to ask his advice. He gives us the route, tells us part of it is tricky, and is ready to hop on his bike and come get us until I say, no, it’s fine, we’ve made it from Florida, we can make it another five miles. He laughs and says ok. When we arrive at Bob and Nancy’s house, they are out front on the stoop, waiting. They see us riding up the street and they cheer, and I know what it is to cross a finish line. It’s fun that they do this for us, and useful, because now I can cross “marathon” off the to-do list.

Nancy calls Bob “Rob,” for reasons I now forget. (She doesn’t like the name Bob? It’s how you get apples? I forget. A funny reason, I think. Funny haha, not funny strange.) He’s long been Bob to us. For awhile I tried to switch to Rob, but it became clear he was fine with either name, so I’m now back to calling him Bob. Why am I going into all this? Not sure, but I will blame it on bike-addled brain syndrome. (BABS.) We spend a very nice couple of hours hanging out with Bob and Nancy in their sun room, just catching up and not being in a hurry to do anything or go anywhere. And although this trip has meant leaving home and all of our normal schedules and obligations, life on the bike is FULL of obsessive packing and unpacking and mapping and scheduling and meal planning, and so to just sit with nothing to do for two whole hours feels strangely irresponsible and lovely. Gary and Cindy are making a dinner to celebrate our arrival in Northampton, and the ride in and of itself. And while we feel a little spoiled to be celebrated in this way, because this trip is the ultimate in self-indulgence if you think about it, we are incredibly touched by all the fuss. People think that what we’re doing is cool, and it’s a kick to have them say so. Bob and Nancy drive us to Gary and Cindy’s home. Bob’s actually on call, and so he’s concerned he may have to leave the dinner at some point, so we take two cars. When we arrive, everyone hands out a lot of hugs and kisses and back slaps. Then we see these signs on the kitchen counter:

In a feat of self-control that my sons would never believe (though we’ll never know, because none of the three is reading our blog because they are all massive losers), I do not cry! I am so touched, though, as is Jerry. More hugs. The six of us have a lovely evening. They’ve cooked mussels in white wine and an amazing Asian short rib recipe. They have the best wine glass id tags I’ve ever seen – little replicas of those 45 record centers that were used on the spindle… Well, here:

We eat until we are stuffed – and this is saying something for Jerry and me of late (we can eat like we’ve never before been able to) – and then we sit around the living room with heads lolled back on sofa cushions and feet splayed out before us, spent. Eventually I ask if we can please now go to bed. Hugs, kisses, thank yous, goodbyes, and rides home from Nancy and Bob (who had been able to stay for the whole dinner without getting called in to work!)

We spend the next morning with Nancy, because Bob did end up having to go to the hospital at some point after I put my head on the pillow and faded out. After coffee and breakfast sandwiches, our friends Bennett and Lilly come by for a visit before we hit the road. Bennett and Gary were in psychiatry residency together in Rochester – also many moons ago – and we became good friends with Bennett and Lilly through Gary and his first wife, Michelle (who met us for lunch in Philly – remember? And the beautiful baby was also Gary’s granddaughter. It’s all coming together for you now, isn’t it?)

ANYWAY, we are so glad to see Bennett and Lilly, who hadn’t been able to come to dinner the night before. Lilly broke her leg skiing recently. We talk about the bike trip, and we talk about Lilly’s injury and what she has to do to heal. Sadly, her own bike season is probably not going to happen for some time this year – if at all. Lilly and Bennett do their own long-distance biking trips, and were part of our inspiration to do this trip. 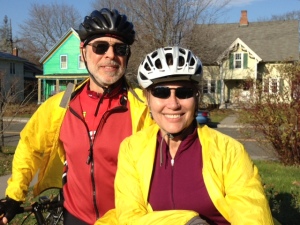 Finally, it’s time to hit the road. We all say our goodbyes. Lilly and Bennett head out. Gary shows up to ride part of the next leg with us. That’s for another post. But in general, Northampton feels again like another step closer to home. I love each of these heady increments. This stuff, I’ll remember best.